Editor’s Note: The author has catalogued and produced a finding aid for the First Parish’s records and artifacts dating from the 17th century through the mid-1990s, with the aid of Judith Gray and Jessica Sims. More current records are now kept by the church. For the full finding aid and a list of these fascinating holdings, click here. 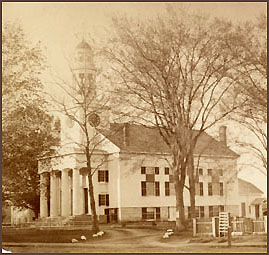 In 2004, the First Parish in Concord gave a large collection of its historic records to the Concord Free Public Library. The recent processing of this rich material provides a natural opportunity to take stock of the long history of Concord’s Unitarian-Universalist church, which was first gathered in 1636 in Cambridge, Massachusetts. Its first ministers, Peter Bulkeley and John Jones, were formally installed in 1637, in Cambridge.
The original meetinghouse was built on the hill on the opposite side of Lexington Road from the present location of the church. A second meetinghouse was built between 1667 and 1673, a third in 1711. The third meetinghouse, renovated in 1791 and again in 1841 (when it was turned 90 degrees to face Lexington Road), burned to the ground on April 12, 1900. A fourth meetinghouse was built 1900-1901 to replace and (as much as possible) to reproduce the old building. Church school facilities and a chapel were added in 1955, kitchen renovations undertaken in 1974, and additional classroom space and handicapped accessibility created in 1984/85. 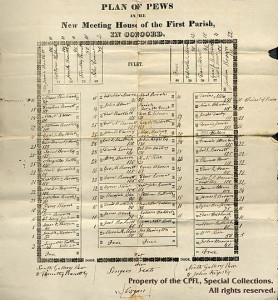 During the evangelical ministry of Daniel Bliss, a group of parishioners left to form their own church, which met at the Black Horse Tavern. In 1774 and 1775, the meetinghouse of the First Parish was used for Provincial Congress meetings, in 1775 and 1776 for classes of Harvard College, which was temporarily moved from Cambridge to Concord for the safety of the students in wartime. During Ezra Ripley’s long ministry, the First Parish grew away from its original Congregational Calvinism toward Unitarianism. In 1826, a group desiring a more conservative form of worship broke away from the First Parish to establish Concord’s Trinitarian Congregational Church.

The official separation of the First Parish from the municipal government of Concord did not take place until 1855/56. Before that time, Parish business was transacted at the annual Concord town meeting. The first annual Parish meeting was held in 1856.

In early times, those who accepted the covenant could become church members and communicants. In 1856, with the separation of the First Parish from town government and financial support, the Parish (distinct from the church) was formed to take the place of the municipal government in managing First Parish affairs, and the Standing Committee created to serve as its primary administrative body. Between 1856 and 1946, membership in the Parish — the ability to vote in Parish meetings — also required a financial contribution.

During the 19th century, those wanting to become members of the Parish affirmed their wish in writing, and those who chose not to do so also expressed their will in letter form. (The First Parish records include two famous examples of this practice — Henry David Thoreau’s 1841 Jan. 6 sign-off from membership, and Ralph Waldo Emerson’s 1865 April 30 affirmation of membership.)

The Parish is governed by its membership at its annual meeting, and administered by the Standing Committee. The Trustees of Parish Donations manage the Parish’s invested funds and real estate. A variety of other committees perform Parish duties. The Women’s Parish Association (WPA), organized at the home of Caroline Downes Brooks Hoar (Mrs. Ebenezer Rockwood Hoar) in 1881, has since that time devoted particular attention to maintaining and furnishing the meetinghouse.

In addition to the meetinghouse and the land it occupies on Lexington Road, the church owns or has owned other real estate in the area, including: properties on the Church Green; the Wright Tavern; woodlots originally used for ministerial purposes (one of which was surveyed by Henry David Thoreau for the First Parish, the original 1851 manuscript survey for it forming part of the First Parish records); and the Stow House (92 Walden Street; used as the First Parish parsonage for much of the 20th century, and then sold).

The records of the First Parish reflect the more than three hundred years of the church’s history. They represent an amalgamation of materials presented to the Concord Free Public Library over the years (singly or in small collections) by a number of individual donors, and of a large collection of records deposited by the First Parish in the Library Special Collections in the 1970s, 1980s, and 1990s and formally deeded to the Library Corporation in 2004. Most of the collection was maintained by the First Parish until transfer to the Concord Free Public Library. Over the centuries of First Parish history, some records migrated from church custody into private hands, whence they were passed on to the Library.

These documents will be of interest to a variety of researchers: social historians; church historians; biographers of prominent individuals (Thomas Whitney Surette and Dana M. Greeley, for example) associated with the First Parish; local historians seeking to know more about the First Parish building, horsesheds, and the Wright Tavern; women’s studies scholars, who may find the records of the Women’s Parish Association valuable; historians of music; and others. Anyone with a potential use for the First Parish records is encouraged to contact the library’s Special Collections.

Photos: Courtesy of the Special Collections of the Concord Free Public Library. Below: 1841 Meeting House 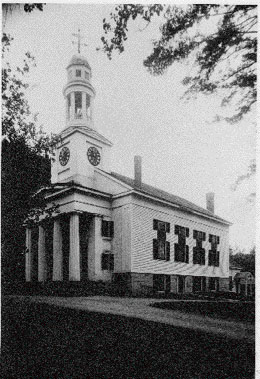